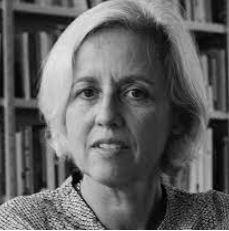 Ursula Biemann (Zurich, Switzerland), crafts video narratives on the politics of environment, climate, and indigenous communities. She conducts fieldwork in remote locations and works the findings into multi-layered video essays and spatial installations. Her video works are complex interweavings of vast cinematic landscapes with documentary footage, science fiction poetry, and scientific data that narrate changing planetary realities. Biemann practices an expanded notion of art which includes collaborative projects, research cooperations, and curatorial endeavours. She has an enduring interest in postcolonial ethnography, as well as other scientific signifying systems, including botany and oceanography. Since 2018, in collaboration with the Inga people, she is involved in co-creating an Indigenous University in the South of Colombia, where different epistemic systems are brought into dialogue.
Biemann is the recipient of numerous awards, including the Prix Meret Oppenheim—Swiss Grand Award for Art (2009), an Honorary Doctorate in Humanities, Swedish University Umeå (2008); the Prix Thun for Art and Ethics (2018), International Art and Media Award, ZKM (2002), and the Prix Palmarès Biennale of the Moving Image, Geneva (1999).