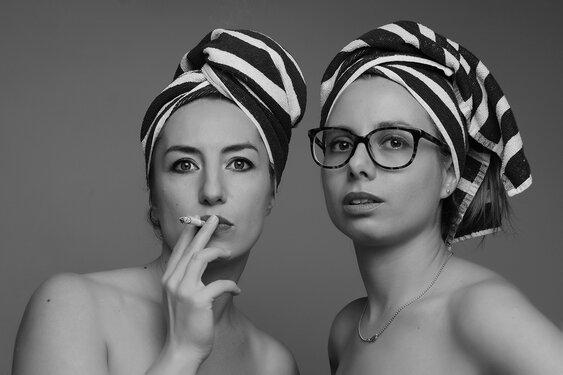 Shame on you! - brought to you by the PeachPreach duo Rumena Buzharovska and Ana Vasileva

Shame on you! - evening of queer storytelling and fun with Zoki Bejbe (as part of the Skopje Pride Weekend)

Shame on you!, an initiative by the PeachPeach duo, is part of the Skopje Pride Weekend and took place in 2017, 2018, 2019. Five storytellers from the public cultural, political and social spheres tell short stories about the physical, gender and sexual shame that marked their social non-normality - hence, "queer" as what goes beyond the acceptable social code.

The idea is for them to publically share stories with a twist in order to transform the shame. In this way the mocked become the mockers – shame turns back to those who are enraptured in their arrogance and privilege, assuming they have the right to act as gender, sexual and moral police and humiliate.

It is evident that out of the shame connected to our desires, pleasures, behaviours, movements and thoughts, these stories create resistance narratives. Finally, our shame becomes our pleasure and happiness. Instead of a bowed head and burning cheeks, we resist. Instead of the unbearable internal suffocation, we burst out laughing. This event has the intention to use humor as a powerful tool to resist and break social norms and pressure that creates the feeling of shame to us as individuals.

After the event we are heading towards the Comedy Bistro for Zoki Bejbe's DJ set.