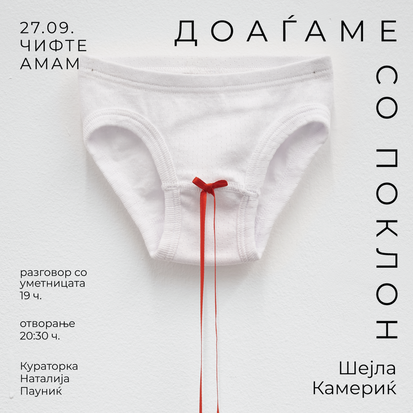 Šejla Kamerić (Sarajevo, 1976) lives and works in Berlin, Istria and Sarajevo. She studied at the Academy of Arts in...

Natalija Paunić is a contemporary art curator and writer from Belgrade, Serbia. She got her Fine Art degree from Goldsmiths,...

Branislav Dimitrijević is a Professor of History and Theory of Art at the College of Art and Design in Belgrade,...

In a friendly collaboration between CRIC - Festival for Critical Culture and the Festival for Feminist Culture and Action - FIRSTBORN GIRL, for the first time in North Macedonia we have the honour and joy to present Šejla Kamerić, one of the most important artists with numerous international references, with the exhibition titled "We come with a bow". The exhibition is in collaboration with the National Gallery of North Macedonia - "Cifte Hammam", which, as always, promotes the modern concept of open public institutions. The curator of the exhibition is Natalija Paunić.
At the same time, at the opening of the exhibition, we will have a rare opportunity to follow the conversation and presentation of Šejla Kamerić, through which we will have the privilege to hear the multitude of gender, political, artistic, aesthetic and socio-cultural perspectives of the artist. The curator, historian and theorist of art and culture from Belgrade, Branislav Dimitrijević, will guide us through the conversation, but Kameric will also be open to answering questions and comments from the public of the exhibition.
CRIC – Festival for Critical Culture and the Festival for Feminist Culture and Action – First and Female, through this exhibition aim to open a critical debate about the influences, dialogue and polemical perspectives of contemporary art and its responsibility in questioning the important social issues that affect the plural identity stereotypes through which culture has an oppressive and marginalizing role, especially when it comes to reading the gendered, female narrative.

🎀 WE COME WITH A BOW 🎀 - Exhibition concept
The upcoming solo presentation of Šejla Kamerić’s work in Skopje looks at the age-long portrayal of women as witches and/or objects. Alluding to the well-known thematic concerns of radical feminism, socialist feminism and post-structuralist views, the exhibition also aims to bring the common, domestic and familiar everyday elements to light and to underscore the issues to which we don’t usually pay enough attention. This intention is set carefully within the new alteration of the show’s centrepiece, “We come with a bow”, which shows an unusually long, thin red fabric that begins as a typical women’s underwear bow-styled decoration and ends up tangling the audience in its own materiality. This gesture – the exaggerated lengthening of the bow – plays with the idea of an object that is no longer an object at all, but it has its own life, its own agency and power.
The metaphorical value contained in this piece exists in many of the others, in various ways. Many of the works remind us of household objects and typically “womanly” routines: knitting, weaving, working around the garden; being a mother; or even “being” a gift, a present to someone (hence, coming with a bow).
Šejla Kamerić uses these processes and states to explore and question the (de)construction of gender, identity, intimacy, and sexuality, as well as the social, political, and economic subordination of women and their representations within the patriarchal societies and neoliberal capitalism. In that sense, the word bow, with this same spelling, could potentially be misread and pronounced differently: this bow refers to bending, a show of surrender, submission, and acceptance, also commonly seen before or after a performance. To read the word differently and view it in this connotation also connects to how women exist in the societies we’ve known so far.
The exhibition will include body of work transferred from her latest solo show in Belgrade, “Mother is a bitch”, other photographic pieces (“Embarazada” and “Unknown”) as well as works from the series “Hooked”, “Missing” and “Digital Nudes”. It will also feature a new work, “Rose garden” which will continue the exploration of the formal line already shown in “Hooked”, while taking the containment of the female body in a different direction.
The crocheted flowers, or more precisely roses, (flowers filled with the symbolic meaning of love, power, beauty, sensuality, mysticism, and sacrifice) immediately bring to mind Hortus conclusus, a motif from Christian iconography, popular during the late Middle Ages and early Renaissance. As Liz Herbert McAvoy of Swansea Univerity argues: “The "to protect the women from sin"; idea is disingenuous, although ubiquitous. In most cultures, female sexuality is seen as dangerous to men. By locking them up, they "contain"; that threat, whilst at the same time masquerading as protecting women from men”.