The Women on Women project (WoW) publishes a book of 25 women stories from history that represent new narratives and...

The Women on Women project (WoW) publishes a book of 25 women stories from history that represent new narratives and paths that highlight women (autobiographies) and stories that are explored through city mapping and scientific research, rethinking the feminist cultural heritage in the area. "Our paths" is a guide along the cultural, political and geographical trajectory of North Macedonia, in which these 25 women participated.
One of them is the story of Vera Aceva - Dosta. On the occasion of the jubilee celebration of the holiday of 80 years of the day of the national uprising of the Macedonian people in the fight against fascism - October 11, 1941, we publish her story.

The sculpture of the monument Woman Fighter, placed within the memorial complex Mogila of the Invincibles, is the work of the recently deceased Macedonian sculptor Dragan Poposki - Dada. Photograph by Sonja Stavrova.

Location: Park of the Revolution, Mound of the Unbeaten, Prilep

Location description: The Mound of the Unbeaten is a memorial complex consisting of two parts, a collective burial ground-crypt of the 650 soldiers fallen in the Revolution during the Second World War, while the second part consists of memorial urns, and in the Alley are the ten People’s Heroes. In the park is also situated the monument “Woman Fighter”. In 1961, on this site was erected a monument that commemorates the beginning of the uprising of the Macedonian people, October 11, 1941, as well as massive organizing of young people. The author of the Park of the Revolution is architect Bogdan Bogdanovikj.

Vera Atseva was born on November 24, 1919 in the village of Oreovets, near Prilep. Upon completing the second year of high school education, despite her satisfactory academic performance, she had to quit school at the age of 16. After that, she got employed in the tobacco industry as a worker in the tobacco factory in Prilep. At the same time, she joined the youth workers’ movement, where she had access to literature and attended illegal courses organized by the LCYY.

The political engagement and activity of Vera Atseva was supported by her closest family members, themselves also engaged in revolutionary activities in the past. As a member of the family that partook in the past revolutionary events, her active political involvement was encouraged and supported. Her brother Mirche Atsev, also an NLS participant, was awarded the Order of the People’s Hero. In the war, Vera Atseva lost both brothers, Mirche, the older one, and Dimche, the younger one, and her parents were interned in Bulgaria. She, though, was fortunate enough to survive the war and live up to the ripe old age of 87, however, there is no fictionalized biography of her life – a narrative form that in the 70’s and 80’s was used to pay homage to the fallen fighters, men and women. Nevertheless, in her biography, the most accessible information underscores that Vera Atseva was one of the politically most prominent figures in the period from the Second World War until her active involvement in the political life of the country in the wake of the liberation.

The chronology of the political offices she exercised in the wartime period commences with her joining the League of Communists of Yugoslavia in 1940, the time when she was already known and recognized by her partisan name Dosta and when she participated in the organizing of the first partisan detachment. Thereupon, she became a member of the Local Committee of the LCY for Prilep. In 1940, at the Regional Conference, she was elected a member of the Regional Committee of the LCY for Macedonia. From that period to November 1941, she was the secretary of the Local Committee in Prilep. At this position, she played a key role in the events that took place on October 11, 1941 in Prilep and Kumanovo, today observed as the beginning of the uprising in Macedonia. At the beginning of 1942, she worked at the Regional Committee of the LCY in Skopje, after which she was engaged as a party instructor in Strumitsa, Bitola, Ohrid, and Veles. In 1943, Vera Atseva became the commissary of the Shar partisan detachment, and during the formation of the First Macedonian-Kosovo Brigade, on November 11, 1943, she was elected deputy political commissar, exercising this office until January 1944, when she was appointed the political commissary of the Third and Fourth District Committee of the LCM (League of Communists of Macedonia). On August 2 of the same year, Vera Atseva was a delegate at the First Session of the Anti-Fascist Assembly of the National Liberation of Macedonia (ASNOM/AANLM), when she was elected a member of the Presidium.

Undoubtedly, Vera Atseva was one of the politically most distinguished figures in the period 1941-1945, however, even in the post-war period, her participation on the political stage did not cease. In the period 1946-1948, she was elected president of the Anti-Fascist Front of Women in Macedonia. She is the first and the only woman elected the Mayor of the City of Skopje, the office she exercised in 1948. At the Fifth Congress of the LCY, July 1, 1948, she was elected to the Central Committee of the LCY. In March 1949, she was elected Minister of Agriculture. From 1951, she was elected minister-president of the Council for National Health and Social Care. Afterwards, she was a member of the Federal Executive Council. Also, she was a representative at several sessions of the Parliament of the People’s Republic of Macedonia and SFRY. On November 29, 1953, she was awarded the Order of the People’s Hero of Yugoslavia; also she is the holder of the Commemorative Medal of the Partisans 1941. 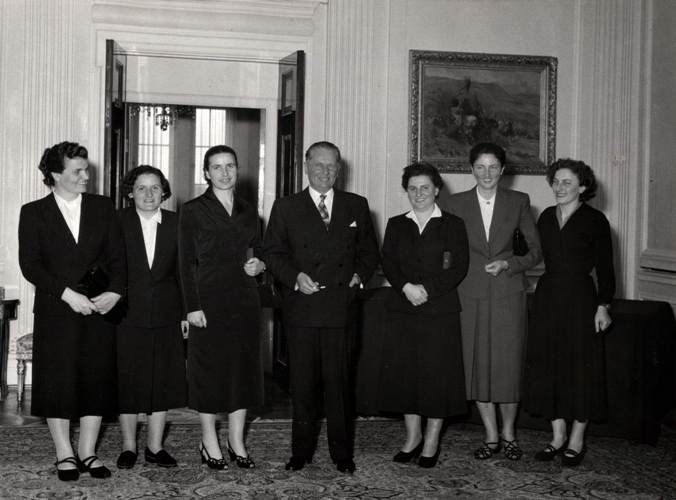 Vera Atseva was well versed with the need for an adequate social policy promoting the position of women in society. In an informal conversation with Ruzhitsa Yosifovska (1938), a retired Visual Arts teacher in a high school in Kavadartsi, we learned that sometimes Atseva knew how to influence the local politicians in power at the time and thus succeed in opening kindergartens in the towns in the 60’s and 70’s, the time when women started getting employed in larger numbers. From her grandnephew Dimitar Boshkoski, we learn that she was against the post-Yugoslav period of privatization in independent Macedonia. In a TV interview on this topic, she voiced her negative opinion on it. After they watched the interview on TV, that part was edited out, remembers her grandnephew.

In the 60’s, Atseva came in conflict with several of the highest-ranking officials at the time, as a result of which she was dispatched to Belgrade. However, even though she was suspended from her political office, she continued to work as a member of the Macedonian Parliament and the Federal Assembly of Yugoslavia. In 1991, she published her book entitled “A Letter to Svetozar Vukmanovikj Tempo”, in which she explains her stance on the political events while exercising her office. She never married and lived in her own house in Skopje. After suffering from Alzheimer’s disease for several years, she died in Skopje on November 10, 2005, at the age of 87. One year prior to her death, a team of journalists from “Utrinski vesnik” paid her a visit at her home in the neighbourhood Vodno, but she was not able to talk at length any longer. What we learned after the info about this visit was published is that for several years Atseva had worked on recollections from her life, which she finished sometime around 2004-2005. “Especially for this purpose, she had bought a tape recorder and taped everything she planned on writing down, and afterwards, her former secretary put it down on paper. She entrusted her grandnephew with posthumous publishing of her memoir.” To this day, her recollections have not been published.

In 2010, the representatives of the Union of Fighters from Prilep submitted a petition to the Council of the Municipality for placing four new busts in the Mound of the Unbeaten, one of which would be the bust of Vera Atseva. This petition still has not been approved. In March 2021, by virtue of a decision on the naming of and changing the names of the streets, bridges, and squares on the territory of the City of Skopje, in honor of Vera Atseva was named a bridge with one of the most important traffic roads in the city.