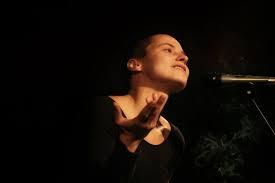 Simona Semenič is a Slovenian playwriter and a performer. She has received the highest national award for artistic creation in Slovenia - Prešeren Fund Award, and she’s a three-time winner of the highest award to be bestowed on a playwriter - Grum Prize. Her plays have been translated in fourteen languages, shown and published in several countries in Europe, USA and the Middle East, and awarded in Slovenia and abroad.