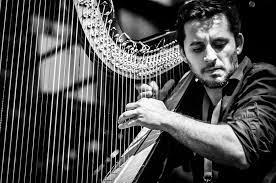 Eduardo Raon has a classical musical education, but is nevertheless a versatile musician. It was perhaps due to his interest in electronic music – as well as rock, jazz and improvisation – that he was something of a black sheep at Lisbon’s Conservatory of Music, where he studied the harp. In 1997 Eduardo Raon became a founding member of the Portuguese rock group Bypass. More recently, he has played his harp, and vibraphone, with the band Hipnótica. Eduardo Raon has also studied fine arts at Lisbon University’s Faculty of Fine Arts.